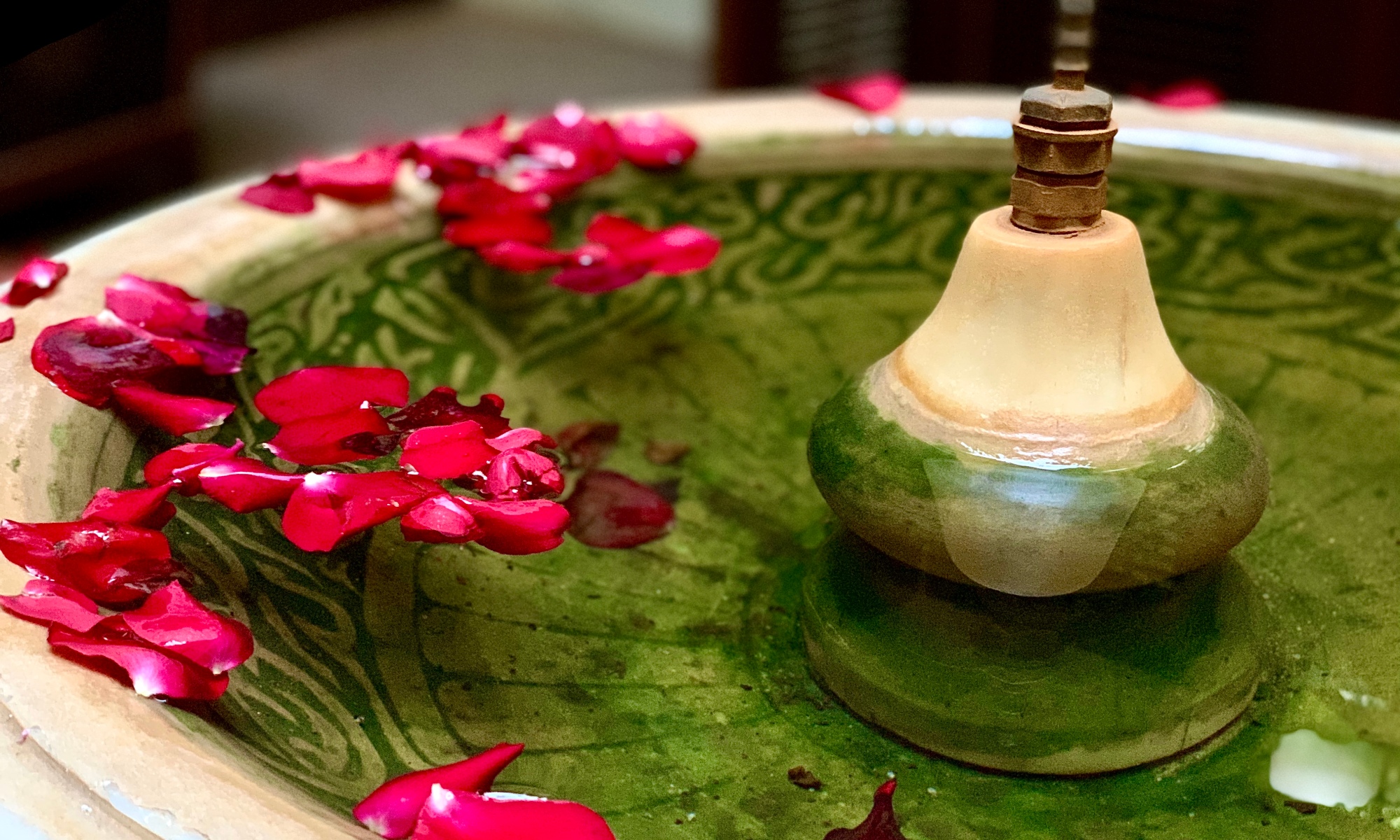 With three distinct gold globes, the minaret of the Koutoubia Mosque dominates the Marrakesh horizon. Legend tells that one day during the month of Ramadan, the wife of Youcoub El Mansour (c. 1160- 1199) ate three small grapes. In penance, she melted down all her jewellery and moulded them into these three great gold spheres. My wife and I, in the shadow of the famous minaret, sat amongst the madness of the city’s Djemaa El Fna market. Formerly a place of execution, it now hosts a carnival of hectic snake charmers, vendors and wide-eyed tourists. In front of me is a monkey in a Barcelona shirt and a plate of freshly steamed sheep head. I took a bite and convinced myself that it couldn’t be any worse than the snail soup I’d already eaten. In the souq, sheep heads are steamed for five hours and served for dinner. Sold as a half or whole head with or without the eyes, the brains are sold separately at other stalls, so I’m told. The steamed head in front of me had the brains, but no eyes. I sprinkle the whole thing with cumin, salt and chilli, and scraped out the tender cheek meat and tongue. The drumming starts to intensify behind us, and I decided that the snail soup was better.

Marrakesh is an ancient maze filled with countless winding streets and even more motorcycles. The souqs are a confusing warren of spices and artisan quarters. The Jewish Quarter of Marrakesh is one such souq built by Spanish Jews after the time of the inquisition in the 15th and 16th centuries. Containing the oldest synagogue in Morocco, built-in 1492, Moroccans are at pains to emphasis to the peace and harmony of the countries different ethnic and religious denominations, which given the long-established marginalisation of the indigenous Amazigh (Berber) people is something of a half-truth. Only the day before, on the way to the seaside town of Essaouira, one rather friendly driver openly revealed his official obligation to give specific hand signals to roadside police indicating whether or not he had a Jew and/or Americans in the car. He told me he didn’t know why… ‘economic reasons or something’. I didn’t pursue the matter, but then again, I’m neither a Jew nor American. I am European, at least until the end of the month. Very few people knew where Scotland was, so I then said we were British, for the moment anyway, depending on who you ask. Most people just assumed we were German. It was easier to play along.

Nearby, the Saadien Tombs sit. They date to the time of Ahmed El Mansour (1549-1603) the Saadien sultan. The Alaouite monarchy, the royal family of Morocco’s current King Mohammed IV, who succeeded the Saadiens, feared the love the people had for the Saadiens and so built a massive wall around the tombs to ensure it did not become an emblem of devotion. The tombs remained hidden and practically unknown for two hundred years until an aerial survey by the French in 1917 revealed its location. With its fakes, façades, parody and authenticity, Morocco is a strange brew of contrast and contradictions. And as we sit in the square, I loved it all and did my best not to participate in the objectification of the ‘Other’. I told myself this when I arrived in the square. A multitude before me had taken pictures of the locals and without permission, turning them into strange oriental objects. People, however, actively court my camera for the money, and I succumb. It is too easy to intellectualise the ethics of post-colonialism when you have money and a passport. I am no better than the multitude – I took plenty of pictures. And posted a great deal on social media – adding brick after brick to a façade of my own.

After a few days, we take the road southeast from Marrakesh towards Ouarzazate zigzagging up the dizzying turns of the Tizi-n-Tichka. We would be stopping off at a tiny village known as Skoura via Telouet and Ait Benhaddou. The Kasbah of Telouet was until Moroccan independence, in 1956, the seat of power of the Pasha of Marrakech, el Hadj T’hami El Glaoui, known as the Lord of the Atlases and believed at the time to perhaps be the richest man in the world. His court in Marrakesh attracted the Great and the Good. Here he held lavish banquets and entertained the likes of Winston Churchill and Charlie Chaplin. In 1953 he attended the coronation of Queen Elizabeth II at Churchill’s invitation, hoping to be knighted. He also kept slaves, hundreds of concubines, held prisoners in dungeons and placed the severed heads of his enemies on the Telouet’s walls right into the 1950s. El Glaoui’s family is currently restoring the Kasbah. The ruin emits a strange mud-brick aura of gothic-ness – a desert Dracula. Blood soaked and dilapidated, this dark Lord’s palace has been left to rot for more than fifty years, yet evidence of its past grandeur is still visible. Our guide was the son of one El Glaoui’s slaves. Dressed in a pantomime Berber outfit, and persistently interrupted by the ring of his mobile phone, he explained the tears in his father’s eye whenever asked out about his imprisonment by the Pasha. He told the horrors and posed for photos. I paid him a hundred dirhams and we left.